About Us
Management
Board of Directors
Corporate Governance
Material Agreements 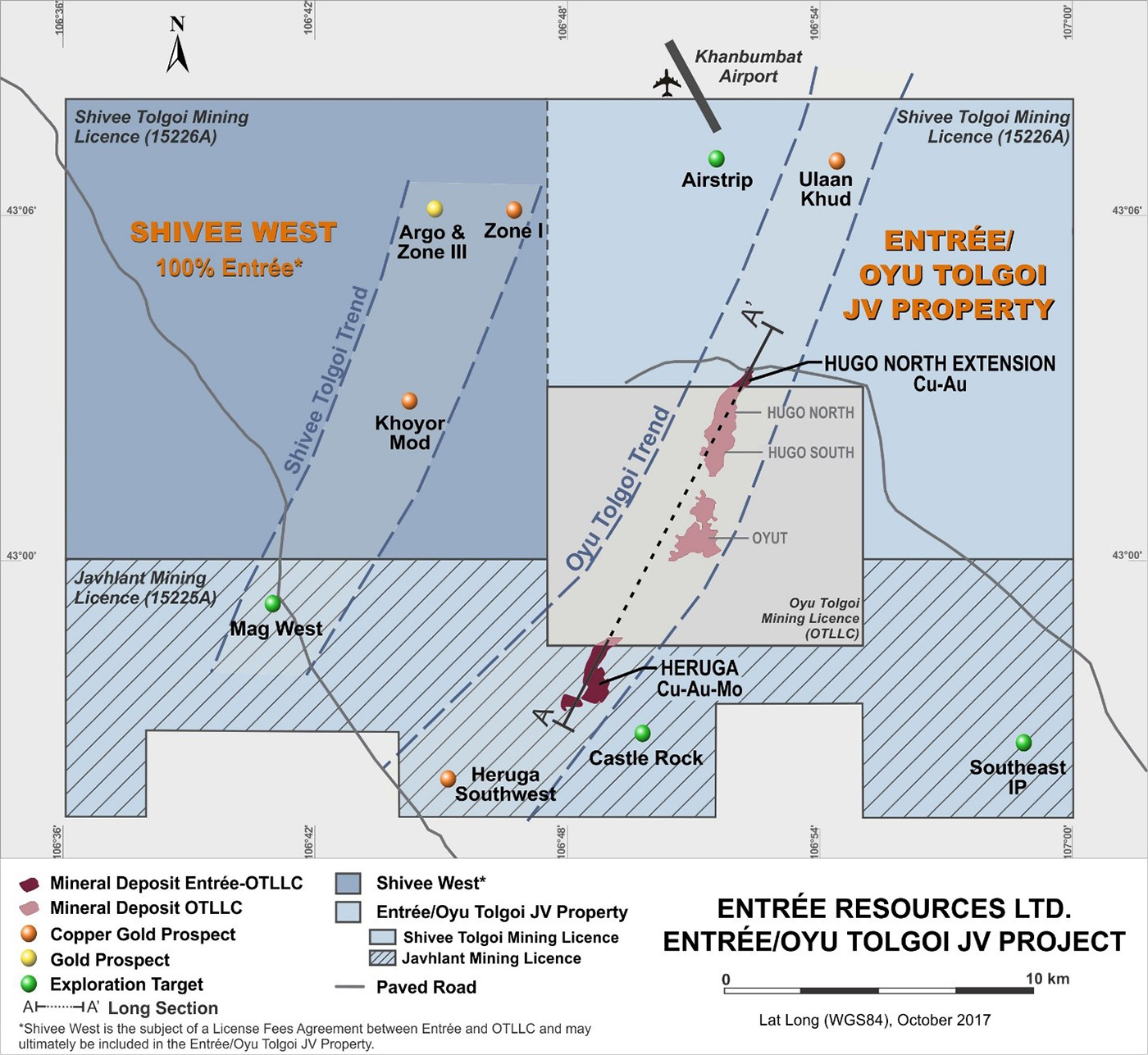 As part of its earn-in obligations under the Earn-In Agreement, OTLLC undertook an exploration program which established the presence of two significant deposits on the Entrée/Oyu Tolgoi JV Property: the Hugo North Extension deposit and the Heruga deposit. These deposits form the northernmost and southernmost parts of the Oyu Tolgoi project, which is a series of deposits containing copper, gold, silver and molybdenum. The Hugo North Extension deposit is within the Shivee Tolgoi mining licence and the Heruga deposit is within the Javhlant mining licence.

On February 14, 2013, Entrée entered into an Equity Participation and Funding Agreement (the “2013 Agreement”) with Sandstorm Gold Ltd. (“Sandstorm”). Pursuant to the 2013 Agreement, Sandstorm provided a $40 million upfront refundable deposit (the “Deposit”) to Entrée. In return, Entrée agreed to use future payments that it receives from its mineral property interests to purchase and deliver metal credits to Sandstorm’s metal account.

Since the first payments that Entrée receives are expected to come from its interest in the Entrée/Oyu Tolgoi JV Property, the amount of metal credits that Entrée is required to purchase and deliver to Sandstorm, and the timing of such deliveries, are determined with reference to Entrée’s share of production and receipt of payments from the sale of production from the Entrée/Oyu Tolgoi JV Property.

On March 1, 2016, Entrée and Sandstorm entered into an Agreement to Amend, which provides for a 17% reduction in the metal credits that Entrée is required to sell and deliver to Sandstorm under the 2013 Agreement. In return, Entrée refunded 17% of the Deposit by paying $5.5 million in cash and issuing $1.3 million of common shares (thereby reducing the Deposit to $33.2 million). At closing, the parties entered into an Amended and Restated Equity Participation and Funding Agreement dated February 14, 2013, and amended March 1, 2016 (the “Amended Funding Agreement”).

Under the Amended Funding Agreement, Entrée will purchase and deliver gold, silver and copper credits equivalent to:

This arrangement does not require the delivery of actual metal, and Entrée may use revenue from any of its assets to purchase the requisite amount of metal credits.

The 2013 Agreement provided for a partial refund of the Deposit and a pro rata reduction in the number of metal credits deliverable to Sandstorm in the event of a partial expropriation of Entrée’s economic interest, contractually or otherwise, in the Entrée/Oyu Tolgoi JV Property. The Amended Funding Agreement provides that Entrée will not be required to make any further refund of the Deposit if Entrée’s economic interest is reduced by up to and including 17%. If there is a reduction of greater than 17% up to and including 34%, the Amended Funding Agreement provides Entrée with greater flexibility and optionality in terms of how Entrée will refund a corresponding portion of the Deposit. In the event of a full expropriation, the remainder of the of the Unearned Balance after the foregoing refund must be returned in cash with interest.

Sign up for the latest news and updates
Designed & Powered by BLENDER
LegalPrivacy Policy© 2022 Entrée Resources Ltd. All Rights Reserved